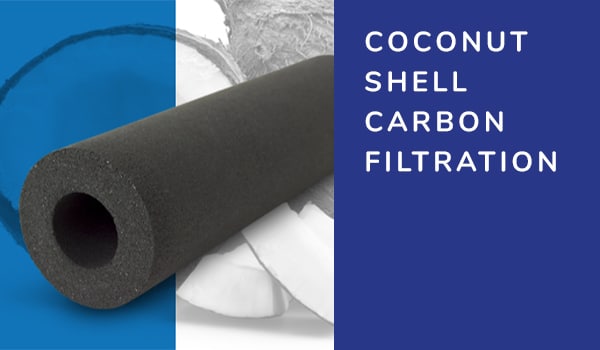 Coconut shell represents one of the newest and most promising options for activated carbon block filters. The density of micro-pores is much higher in coconut than in other forms of activated carbon, meaning it has more surface area and more general porosity. By way of comparison, it contains 50 percent more micro-pores than bituminous coal. This makes coconut better able to adsorb volatile organic chemicals, which are otherwise difficult to remove from water.

Coconut shell carbon’s purity also makes it a better candidate for activated carbon. Whereas other carbons can contribute taste due to inorganic ash, coconut contains a relatively low amount. This creates a more consistent, uniform and non-leaching carbon block that outperforms other options in terms of quality.

Manufacturing coconut shell activated carbon is also easier. Coal and wood both produce significant amounts of dust and fine carbon particles, while coconut produces less of these potential contaminants. Due to this lack of dust, and to the fact that coconut harvesting is a year-round, renewable activity that does not kill trees, this can be considered a green method of obtaining activated carbon.

The benefits of coconut-based activated carbon are as follows: